The painter Leonard Linde (2013) in his 12 interpretations of modernism paintings reveals the most characteristic things of such well-known names in the art world as Pollock, Rothko, Mondrian, Malevich, Renoir, Naumov, Warhol, Dali, Van Gogh and Picasso. One of the compositions is created by Leonard's authortechnique, where the paint is smeared with the help of a water gun. For four-year-old artist, Leonard, this is his second exhibition of paintings and was inspired by Leonard's father, art and design teacher, graphic and web designer Martiņš Linde. With this composition, Leonard began his cycle of modernist painting studies. Compared to the first collection of his paintings "12 months", the format has become larger and the tasks are more diverse and complex.

Creating this painting, the canvas was on the ground, and the paint was splashed with a brush and drawn from the color packs.

This art, as it is characteristic of modernism, broke the borders and broke out of canvas frames on the legs, arms, nose, floor, furniture, etc ...

Pollox discovered his unique painting handrail by accidentally pouring on the canvas and later became famous with his slags and drips. In 2006, his painting "Number 5" was sold for $ 140 million, setting a record for the most expensive paintings of that time.

This painting technique is excellent because almost nothing can go wrong, but the result usually looks like art worth millions! The painting of the large-color squares by Leonard was completely new, except for the coloring of the cardboard in white with the paint roller. Until now, he was characterized by varied and loose strokes with a circular tendency leaving a lot of white backgrounds. This work shows the same type of strokes, just putting it very dense, leaving no unpainted canvas.

In this composition, Leonard chose the proportions of colors and squares according to his own feelings.

Rothko is one of the modernist geniuses of painting who has created an unprecedented style of painting and has been able to build the value of his work with the help of his deep philosophy and fine language.

This painting technique is exciting if there is a large enough format and the person is smaller than the spectacular color space and is ready to go into the eye-catching nuances. 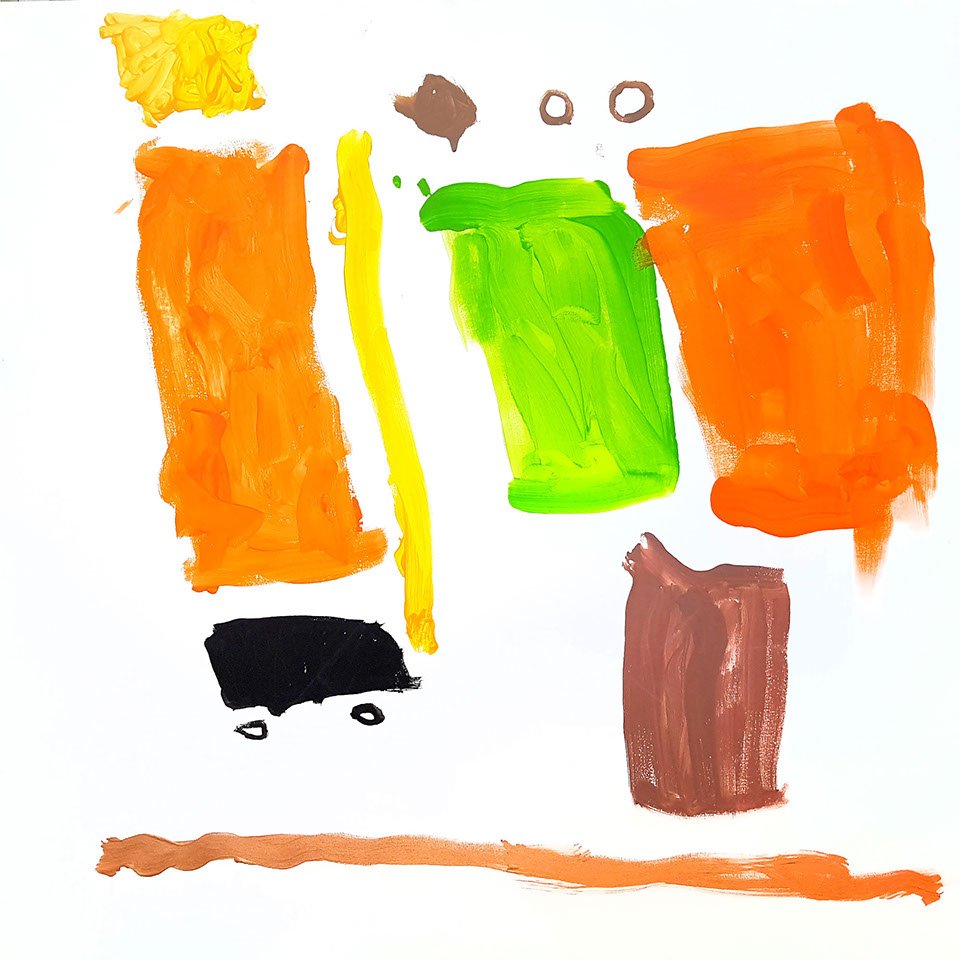 The painter chose this work to start with a green color, which was made warmer by mixing yellow. The last touches were black circles, which turned the famous Malevich black square into a car that can go to Liepaja.

Malevich is the creator of abstract geometric art, who, with his black square, strongly influenced the formation of modern art. He called his new style of painting Supermatism. He wrote about it as a poem and thought of it as a pastor. 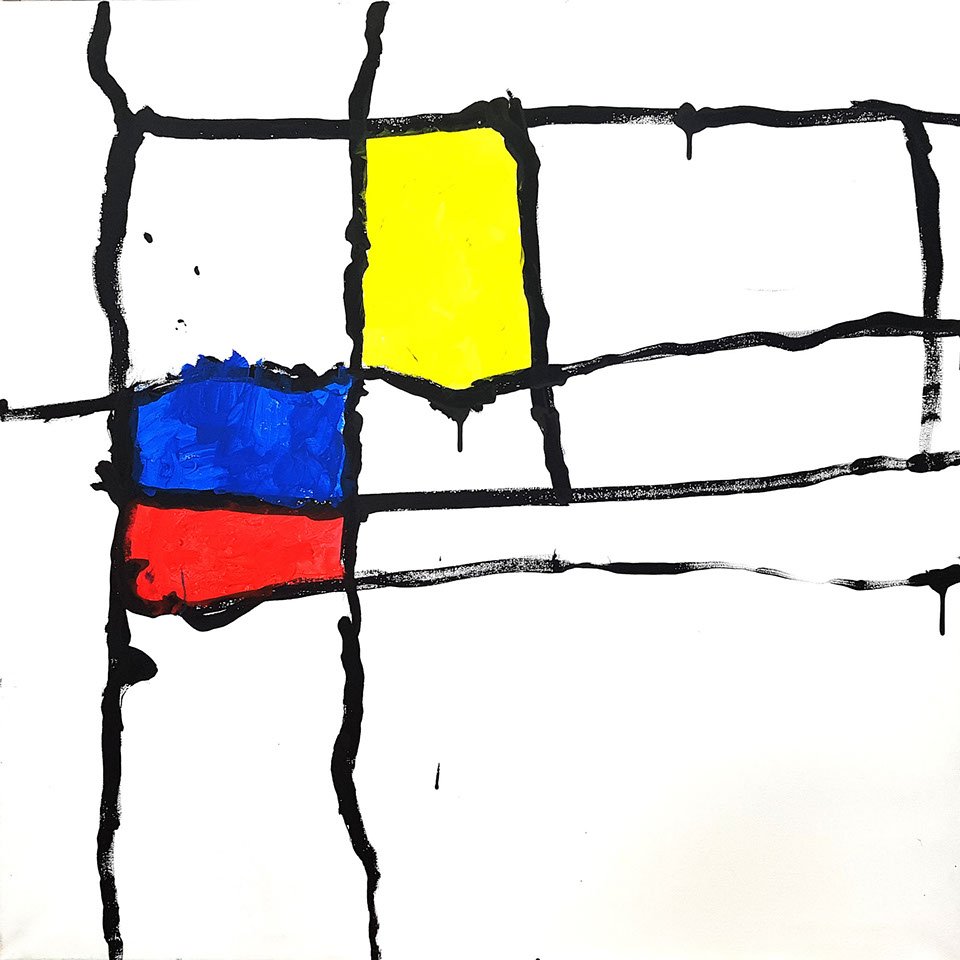 Mondrian had his own ways to achieve geometric precision, but Leonard created line rhythms and color space relationships, giving the geometrical loveliness.

Mondrian is one of the innovators in abstract painting, and is remarkable for creating a peculiar, new style of painting that has no connection to the real world, so the titles also contain numbers and words that do not form associations with the surrounding environment. He called his style Neoplasticism, and we see its resonance in architecture, interior, fashion and design. After finishing his work, Leonard said he had drawn Leonard. Three eyes, two noses and one mouth. Leonard's dad, looking at this painting, sees himself, his emotions, and translates expressive abstractions into his actual images and life events.

Picasso has said: "I needed 4 years to learn how to paint as Rafael, but all my life to paint as a child." Picasso has tried different styles of painting, created a huge amount of works and portraits, but has earned the greatest recognition as a cubist creator. The depiction of Cubism is not a distorted or disfigured reality, but the true essence of things and people. Leonard in Plenary at the Rundale Palace met experienced painters and painted from nature. Like Impressionist painters, Leonard tore the moment and color he sees and feels at that moment. His attention was attracted to the Rundale Palace garden rose bush, to the rocks on the ground and to the sunny Rundale Palace in the background.

Renoir is one of the founders of Impressionism and an extremely masterful creator of beauty. As an impressionist, he practiced painting in the plenary and studied new techniques of displaying natural light. He is distinguished by the precision of visual display, beautiful lighting and romantic color gamut. Just like Pollock's splash painting, there is a need to set up a workshop to avoid damaging the interior, and expect that the water gun can shed and not work after shooting. Leonard sees sun, moon, stars, trees and night in his composition. In this work, he used a color gamut similar to Van Gogh and his characteristic strokes, which are as cool as snakes and as flowy like water.

Van Gogh had a unique and peculiar way of expression. His handwriting and stroke are easy to recognize in the modernist landscape, unfortunately he did not experience the great world-wide excitement for his art in his life. In his view, the stars symbolize life and death. Once he wrote to his brother that, like in France, you can get somewhere by train, people can get to the stars by death. This is one of Leonard's long-term paintings. At first, he dealt with the sky and the ground, with that able to achieve the air perspective effect. Then he drew houses and followed a linear perspective. In the "Desert", Leonard added something to his composition - a children's playground with a pool.

It is pleasant to study and imitate Naumov, because children likes his joyful coloring and is different from other artists. Leonard's work also shows some influence from the painter Peter Purmalis, who taught Leonard to draw lines and imagine that they were flowing around invisible stones. Leonard used this technique to make clouds and stones shining in the sun. One of the most challenging thing in Leonard's modernism painting cycle was to paint as Dali. It means finely, accurately, creating an illusion of reality that has been twisted as a credible and strange dream. In this composition, the contribution of Leonard's creativity is small and involves the reduction of casualties and excess details, while Dali's art has opened up new dimensions in Leonard's work that can be seen in his other compositions.

Dali considered himself a genius, the world's best painter of his time, but in comparison with the Renaissance masters Rafael, Velassez and Vermeer, he called himself a bad painter. His eccentric personality and shocking publicity made him the most famous surrealist painter in the world. Leonard loves to "draw what I want!" And he does it almost every day. He creates his own graphics on different paper sizes with pens or pencils. This is his first large-scale work with felt-tipped pens. Each of the painted images has its own story and relationship with other characters in the composition, which Leonard likes to tell. In this composition, he has drawn himself, people close to him, machines with various adventurous technical characteristics and turtles ninja, which can be identified by their weapons.

The composition is called "Lidobunkak" because there are many balloons that fly. Bunking means burning, in Leonard's language it could be said - fire bunk. This composition soon became familiar with the art of Dali, and therefore can be seen as the effect of surrealism - the letters of Leonard are on the stems so that they do not fall, as do Dalí's paintings, the stalks support a variety of chiral bodies. When painting a large-format portrait, the main task was to understand the proportions - where on the canvas and how big the facial details should be. After solving the main task, Leonard had a place for self-expression, where an unexpected miracle occurred, which initially seemed to be a mistake, but then turned out to be a magnificent stroke on the forehead, which looks like the Nike logo and fits perfectly in the context of Popart, where something popular plays a key role in art.

One of the popular art (Popart) icons is the Warhol colorful portrait of Merlin Monroe, which shows the art and culture trends of its time, when in the 60's in Américas people wanted to spend more, buy more, celebrate, party, be new and crazy, cheap and glamorous, colorful and plastic, worship superstars and pop stars!

"Have a good life for you!" 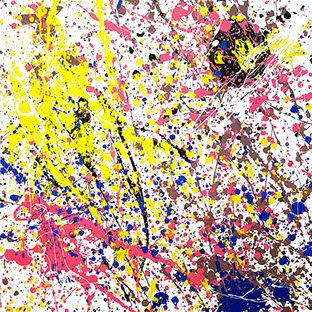 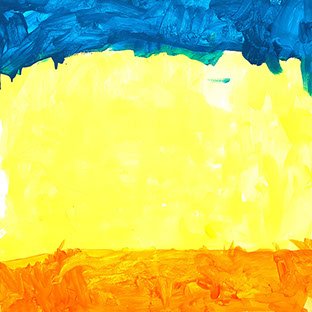 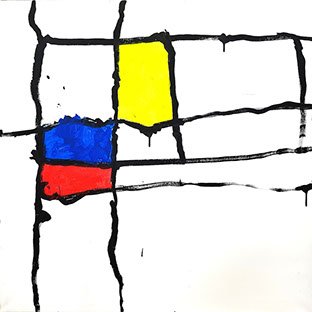 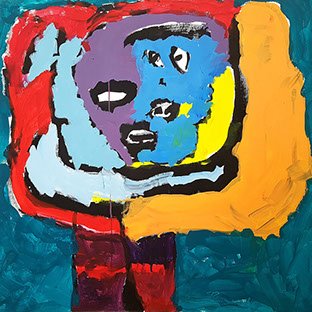 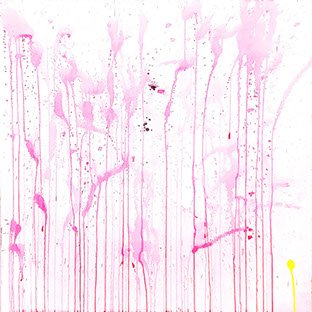 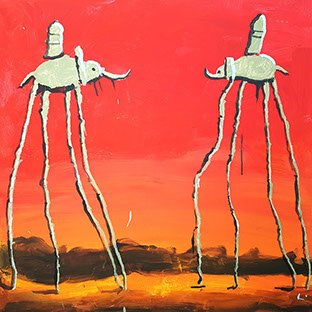 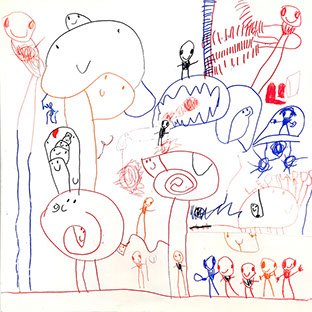 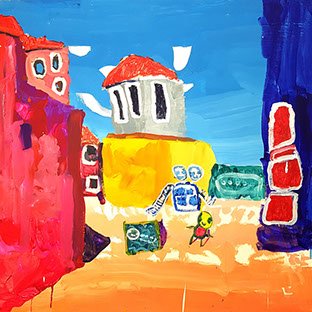 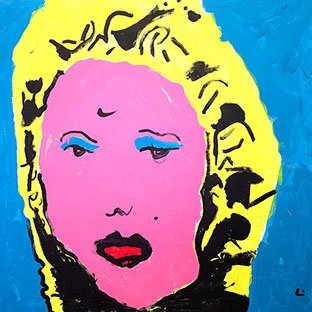